"... thrilling and exciting and OUTSTANDING! From start to finish, I was consumed and wouldn’t ... no, couldn’t put this book down until I hit the end."
- Craves the Angst 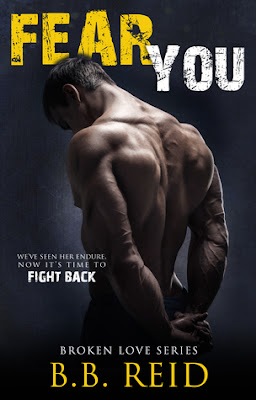 BOOK BLURB:
What happens when she’s had enough?

Lake Monroe has given in to her childhood tormentor too many times. She knows it, he knows it, and even their enemies know it. When he returned after being found guilty of a crime he didn't commit—a crime he thought she set him up for, he returned darker than ever, demanding her body and her submission. To survive him, she knew she had to give in to fear once more or suffer the deadly consequences...

But Lake experienced what it was like to submit to the dark and demanding boy who invaded her dreams. Now she’ll experience what it’s like to fight him.

What happens when he wants more?

But after Keiran had conquered her body and tasted her submission, he found a new addiction instead—one he has no intention of giving up.

As secrets unfold,
Identities are revealed,
Danger closes in,
And they both discover what it really means to fear...

5 “More” Stars!
Dangerous, explosive and down right sexy! A fantastic second book in an amazing series!

The Review:
The “Dark Lord” has returned. And loving him is so wrong, but so, so right!

Oh, and we also get dual POV’s! That’s right. We get Keiran’s POV in this book! As if this series wasn’t already totally amazing and completely addicting, the author amped it up with Keiran’s thoughts and inner turmoil. I love that wicked, devilish, corrupted guy so much!

There was a ton of things going on in this read. It was thrilling and exciting and OUTSTANDING! From start to finish, I was consumed and wouldn’t ... no, couldn’t put this book down until I hit the end.

If you loved book one, then you’re going to flip even harder for this one.

Story/Characters...
Lake Monroe is fighting back. No longer the meek girl filled with fear, she takes matters into her own hands and decides enough is enough. I can’t even describe how proud I was of her in this book. She was determined and strong and absolutely brilliant in her eagerness to not be the pushover we met in book one. I loved her in that book, sure, but this book ... she shined!

Lake is set on her own brand of revenge and when things get hairy between her and Keiran, as they always do, she steps up to the plate and plays ball with the big boys. I was completely entertained by her in this book. She rocked her fear and the passion and sexiness between her and Keiran was off the charts HOT!

Keiran Masters isn’t done with Lake yet and he knows he probably never will be. But when dangers from his past comes back to haunt him, his hate and loathing of the one girl he vowed to possess suddenly turns to protectiveness. He can’t let her go and he can’t give her up. She’s his drug of choice and she’s the only thing that can bring him back to life from the darkness of his past.

Keiran is still obsessed with Lake. He’s still bent on teaching her a lesson and he’s still very much the bully we fell in love with from book one, but in this book, he has an opportunity to explore a different side to their relationship. One of protectiveness and openness and he takes it. It’s all kind of new for him and emotions aren’t something he deals with well, so watching him grow from an anti-hero to more of a hero was fun and exciting.

This book had such amazing character development and gradual, intelligent, natural growth to both the story and the characters. Even with the subplots going on and the side characters, it all felt intricately interwoven into one magnificent story that flowed flawlessly and ended beautifully ... but definitely left a lot of room for more in the Keiran and Lake journey.

The Wrap Up:
I’m in awe by this series. I love complicated stories. I love out-of-the-realm-of-believability kind of stories that are filled with drama, angsts and love/hate characters. This series is all that and more. I can’t wait to read book three, which is Keenan’s story, but from what I hear, also has plenty of Lake and Keiran to keep us updated on their relationship. YAY!! ;)