"I had a great time reading this one... Great story and great writing." - Craves the Angst 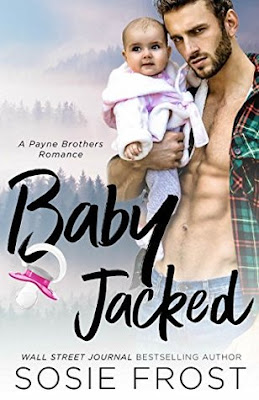 COPY PROVIDED BY: Amazon *FREE*
MY GOODREADS REVIEW LINK
RATING: 3.5 Stars!
CLIFFHANGER: Yes - leads into next book about next set of characters

Five years ago, I let the girl of my dreams get away.

To be honest, I set fire to her barn, fought with her brothers, then exiled myself to a logging company in the Canadian wilderness.

But a reclusive b@stard can’t hide forever. When my sister got sick, I took in my two young nieces. Now I’m paying rent to Sesame Street, drinking Jack and fruit juice, and reading my chainsaw manual as a bedtime story.

I’ve gone from lumberjack to babyjacked, and I don’t know what the hell I’m doing.

Fortunately, I found a nanny. Five years have passed, and Cassi’s not just my best friends’ little sister anymore. She’s all grown up, dark and beautiful with a smart mouth and a broken heart.

Doesn’t take long before she’s falling for me again, but I can’t shout timber yet.

Cassi can’t forgive the past. And I can’t tell her why I ran.
When a man doesn’t deserve a second chance...
He’s just gotta steal her heart.

Babyjacked is the first novel in a brand new romantic comedy series by Wall Street Journal Bestselling Author Sosie Frost! Love stand-alone romances set in a connected universe? The Payne Brothers are sexy, deliciously tempting, and, like a real family--they can't stand each other. Fortunately, these small-town women know how to handle their men. Hearts will heal, one romantic comedy at a time.

Babyjacked is a complete standalone, 100% safe, contains no cheating or cliffhangers, and is guaranteed a heart-warming Happily Ever After.

The Review:
Honestly, this book was pretty good. I love second-chance romance reads and I had a great time reading this one. There were a few frustrating moments, but it also had some seriously funny moments in it. Funny enough that I found myself laughing loudly at some of the insane antics from these characters as well as the comical tone of the story itself. I also felt those lovely tummy flutters when Rem and Cassi were together. It was obvious in so many ways Rem struggled with what happened in their past, his regret for abandoning the only family he knew and the only girl he ever loved. His struggle to find himself in this book was real and by the end, even though I was frustrated with him, I was rooting for him, Cassi and those two, sweet little girls.

Story/Characters...
Family drama...
This book was loaded with it. Cassi Payne is the adopted daughter in a house of five older, bio brothers. After their father passes away and leaves the farm to all his children, forcing them to come home and deal with it, every day is a war zone in the Payne household. One brother is trying to honor his deceased father's wishes. One brother deserted the pastoral life he once vowed to live, for a life of self-imposed isolation. One brother is hardly hanging on and keeping secrets. One brother is so angry, every day is a fist-to-mouth moment. One brother ran away to join the military to escape the farm. And the sister, Cassi, is right in the middle, always their anchor and always their glue.

Remington Marshall is the town bad boy who grew up in a dysfunctional household, but the Paynes took him in and treated him as one of their own. He and Cassi fell in love, but something happened one night that sent Rem running out of town and Cassi left with a broken heart.

Five years later, he returns to help his sister with her two kids and after seeing Cassi again, he talks her into helping him care for his nieces, just so he can spend time with her. Spouting declarations of being a changed man, he sets out on a mission to win her back.

But it’s easier to say you’ve changed than to actually change, especially when you’re hiding secrets that could destroy everything.

I loved this story! Told from alternating POV’s, we see the internal fight as Cassi and Rem try to deny feelings that never went away. And once Rem gives into them, we see his determined fight to win back her broken heart. It was such a great journey and this author wrote it with wit and intelligence.

I loved how the author cemented Cassi as part of the family despite them being racially mixed. She was one of them, no questions or second guessing. Even when the family was in the middle of a meltdown, she was their sister. Period. I loved how they were written!

BUUUUUTTTT...
My only issues with the story were the constant bickering of the brothers and their brawls that ended with the destruction of the house/farm they were reluctantly trying to save. I also somewhat disliked the way they depended on Cassi to keep them together, insisting she neglects her own life to help them sort theirs out. Their antics were kind of funny, but it set a tone for their characters and I kept wondering how the author was going to redeem them in the following books, considering this is a series. These are grown men acting like spoiled teenagers. Even Rem had his immature, fist-banging-the-wall moments.

There was no big surprise at the conflict. We all saw it coming from the beginning of the book, but I loved the way the author handled it. It felt real and the angsts and drama was all there, written into the story and their lives and it played such a huge hand it how it all turned out. I enjoyed watching it unfold and the ending results after all the lies were laid bare. Cassi’s forgiveness knew no bounds and I think that’s why I loved her so much.

Now let's talk about Cassi and Rem together... HOT! Sweet. Sexy. Angsty. And funny! Cassi and Rem were so much fun to read and watching big, tough Rem fall in love with his nieces was adorable. Watching him conflicted with what was best for them was heartbreaking, especially since he thought he wasn’t what was best.

The townspeople? I loved the way the author wrote them, but holy-moly were they so judgemental. I understood why Rem was reluctant to come back to Butterpond. I would have been too.

The Wrap Up:
This was my first book by this author. Overall, this story was a really fun read and a great intro to the series. And though I had my issues with the brothers and their intense drama, I was intrigued with the ending of this book, which introduced the love interest for book two! Their meet/greet was wonderful and I’m looking forward to seeing how Julian digs his way out of the mess he’s made.

Posted by Craves the Angst at 3:03 PM