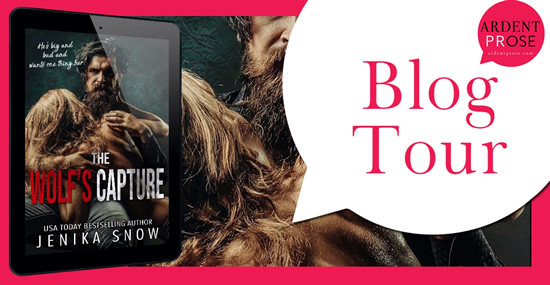 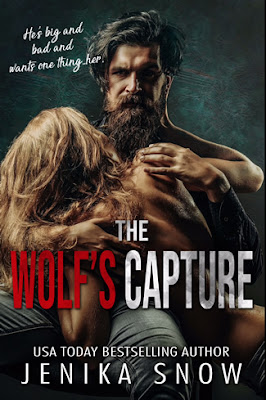 BOOK BLURB:
It should have just been a simple vacation, away from everyone and everything to clear my head. But I soon realized I wasn’t alone.

He stalked me, hunted me. I should’ve run faster, tried harder. But the truth was I liked him chasing me.

Wolf was a ruthless man, his way of living barbaric. Now he had me in his off-the-grid cabin, what he deemed my new home. I was his new wife, would have his babies.

I was his irrevocably.

I shouldn’t have felt arousal. But I did.

He’s not going to let me escape ... but then again, maybe I don’t want to.

Warning: This one has bite to it—even if it’s NOT paranormal! As per the usual ... it’s short and fast, pretty unrealistic, but it gets right down to the juicy bits. It’s one of those stories that will have you wanting to find your own Wolf in the woods.

Get it now at Amazon!

I felt like a fiend for him, like my body wasn’t my own, like I just needed to give every single part of myself over to him. It was insane, maybe even delusional, but I wanted it more than I’d ever wanted anything before.

He stood and kept his back toward me. I licked my lips, my pulse thundering so loud I wondered if he heard. Then I found myself moving closer to him until I could have reached out and touched his back. I saw the way he tensed and wondered if he knew how close I was to him.

“I can’t let you go,” he said in a gruff voice, his back still to me. He turned around then, the shadows dancing off his face, his body seeming even bigger than before. “I wanted you as mine since I first saw you. Now that you’re here the thought of you leaving isn’t something I’ll allow to happen.” He took a step forward. I found myself moving one back.

My heart was racing and I started breathing faster and harder. The air in the room became thick, almost suffocating. It was like honey covering my body, coating me. He moved another step toward me, his massive body dwarfing mine, his scent making me feel drunk.

“W-What?” My voice came out soft, that loan word a stutter. Oh, I understood exactly what he said but he spoke the words with such conviction, such determination that I felt them in every part of my body.

“I have a home, a job.” Although the very thought of those things in this moment, standing before Wolf, seemed distant and unimportant. Hell, they seemed that way even before I’d been in this situation.

His expression was fierce, almost stern. He stared into my eyes, the dark depths of his heating me like a fire burning deep within my belly.

“Materialistic things.” He said those two words in a gruff voice and took another step toward me. “Life isn’t about what we have, but about what we accomplish.” He lifted his hand and gently wrapped his fingers around my throat, his palm so much bigger than my neck. “Connections with that one person who owns every part of you, creating a family with them…” His voice had gone done an octave. “Those are what’s important.  That is what life is about.”

“Nothing else matters aside from you with me, Ruby. You are mine.” And then he leaned in close and placed his mouth on mine, devouring me as he slipped his tongue between my lips and fucked me there. 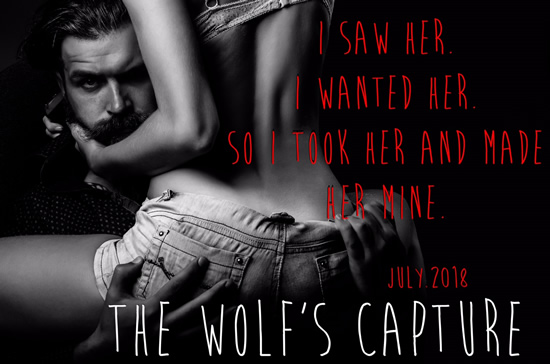 Jenika Snow, a USA Today bestselling author, lives in the northeast with her husband and their children.

She prefers gloomy days, eats the topping off of her pizza first, and prefers to wear socks year round. 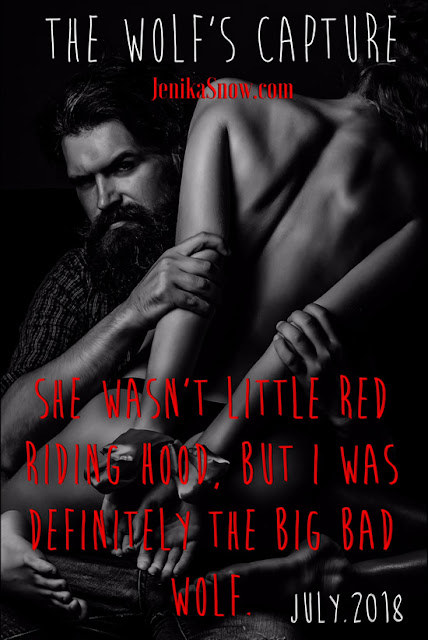