NEW ARC REVIEW!! YOU HAD ME AT CHRISTMAS Anthology: 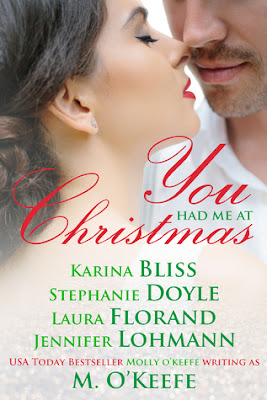 BOOK BLURB:
What’s better than a little romance at Christmas?

Snowbound friends become lovers. Enemies discover they mean far more to each other than they ever dreamed. A marriage in trouble is saved, and strangers find connection in delicious encounters... It’s Christmas, and everything is possible.

A gift to you. Five beloved Contemporary Romance authors bring feel-good magic to the holidays in this specially-priced box set.

- PLAY by Karina Bliss -
a Rock Solid romance
Rock star Jared Walker is within reach of career glory...but his marriage is in the pits. Determined to save it, he talks his wife into holiday dates with only one rule: they must pretend they are strangers.
But when he discovers what Kayla really wants for Christmas, will he be able to give it to her?

- ONE NAUGHTY LITTLE CHRISTMAS by Stephanie Doyle -
Workaholic Kate never expected to find herself looking for love online on Christmas night. Then John appeared on her screen and her whim to escape loneliness turned into the hottest sex of her life - even if it was via text. John knew Kate was too classy for his ex-con ass, but he was about to learn that Kate knew how to fight for what she wanted. And she wanted more of him.

- TWELVE KISSES UNTIL CHRISTMAS by Jennifer Lohmann -
Escaping her abusive father and small hometown to follow her dreams takes money Selina Lumina doesn't have. After a millionaire software developer offers her a ride out of town, she has to decide whether to follow her aspirations or take a chance at love. Could a snowbound night on the road turn into a Christmas miracle?

- SNOW-KISSED by Laura Florand -
(previously published as part of the Snow Queen Series)
After the utter destruction of her marriage and her happiness, Kai knew it was better to shut herself away from the world than to hurt and be hurt.

Holed up in her mountain cabin, Kai plans to spend her Christmas alone. Until her not-quite-ex-husband shows up as the first flakes start to fall. Now should she send him back out into the cold? Or can she be brave enough to let this winter snow bind them back together?

Growing up in the mountains of Wyoming Trina and Dean had been childhood friends until the bitter feud between their families drove them apart. When the magic of Christmas Eve tips the star-crossed lovers together year after year, will they be able to make sure this holiday is not their last?

REVIEWERS NOTE: I received this eARC from author Karina Bliss in exchange for an honest review.

5 Stars!
Beautifully enlightening, romantic and heartfelt! This captivating anthology packs an emotional punch and reminds us what commitment and true love is all about.

The Review:
My main review will be for Play by Karina Bliss followed by my review of the anthology as a whole.

Play is a novella featuring Jared Walker and his wife, Kayla, who we met in the first book, Rise of the Rock Solid series. I LOVED that book. The author gives us an incredible story mixed with fun, witty bantering between the mains and solid, connectable character moments as they take us on a powerful journey of redemption. I was excited to get Jared’s story. We knew things were rocky between him and his wife in the first book as they struggled with the spotlight and the chaos rock life threw them in, but we never got the depths of their story. Here, we do! And it was magnificent!

The Rundown:
Jared Walker is the base player of Rage, a band with lead singer problems and an uncertain future. But that’s the least of his worries. He’s just realized that the love of his life, the woman he fell in love with when they were teenagers, the woman who has seen him through every major life event, including making the band and having kids, is about to be lost to him forever. Their biggest fight came while she was on tour with him and she left early, packing their kids up and leaving behind him, his ego and the crowds of women flaunting themselves at him.

Now he’s home and determined to get back to the love they once had for one another. Before it’s too late. Or is it already?

Kayla Walker was once a confident, happy, outgoing woman. But after her ruinous experiences on the road with her husband, whose growing ego took over the musical nerd she once fell in love with, she’s not so sure her marriage will last. But Jared’s decided to try and now she has to decide if she wants the same things as he does anymore.

My Thoughts...
I LOVED these two! I loved Zander and Elizabeth from book one, and these two were just as golden! Through the brilliant writing of the author, you can “feel” Jared’s desperation and Kayla’s heartbreak. These two were literally at the end of their relationship. Jared is determined to regain her love and her trust and find out what is at the root of her change. Kayla is just hanging on by a thread, hoping this isn't the beginning to a tragic end.

Watching these two reconnect was exciting and thrilling and all kinds of emotional. There were times when Kayla’s hurt was so palpable, I could feel it in my own self. She experiences what all women do when plagued with self doubt. I hurt for her and I connected with her in a way I’ll never forget. Her pain was real. And that’s one of the things I loved most about this novella ... and this series. It was REAL. Real struggles, real emotions, real troubles. Real fixes.

I loved that the “fixes” in their relationship weren’t over the top or paid for by Jared’s fame and money. In fact, when extravagance was attempted, it was ruined by life events and real circumstances. The author kept their story firmly planted in real life and I loved that!

Jared worked hard to resurrect his dying relationship. He realized his hand in devaluing it and swore to mend it at all costs. I enjoyed his commitment and his loyalty to his wife. And watching Kayla reclaim her femininity, her sensuality, her confidence and her sexual awareness was exhilarating! I loved the strong, brazen woman she transformed back into and felt a deep connection to the trials and confidence shattering remarks meted out by the shallow, vapid public whose judgement was cast so callously down on her. Like the first book, this read made me really think about the lives of these characters ... and here I am, days later, still dwelling on it. I love thought provoking reads and this one does that in spades.

Ok, I could literally go on forever about this novella. It was amazing. And only the second book I’ve read by this author. But definitely not my last. I’m hooked on this series and if you loved Rise, you’ll love this. If you haven’t read Rise, you’ll want to after reading this novella.

I just love this author’s writing so much and you will too!

The Anthology...
Romance is in the air!

This book is filled with stunning talent as each author takes us through five different couples who are having troubles in their relationships. There were moments when I was so caught up in the stories that I forgot real life and became mesmerized by the lives of these characters. Their struggles, their reclaiming of one's self and their ultimate decision to either go forward or to let go of the things they loved most. Each individual story is unique and earnest, filled with happiness, sadness, longing and passion. You can’t go wrong with this anthology ... and right here at the holidays, it will definitely get you in the spirit of things.