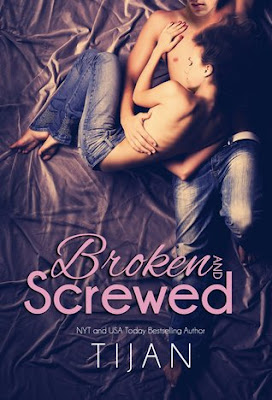 BOOK BLURB:
Alexandra's older brother died the night he graduated. That day changed everything for her. No longer was she the party girl. No longer did she care about being popular and no longer was her family the happy unit she always thought existed. The only person who could help her heal is the same person who loved her brother as much as she did, his best friend. She only hopes to keep her entire heart from breaking when Jesse will move on, and she knows he will.

After Ethan died, Jesse excelled at basketball, partying, and girls. He used it all to turn his emotions off, but the irony was that Alex was the only person who could do that for him. She helped him forget, but she was the one person he shouldn't be with because the secrets he knows could shatter everything. They could shatter her.

The Review:
I’ve been on a Tijan kick lately, absorbing everything she’s written. Her books are filled with drama, crazy situations and insane characters. And They. Are. Absolute. GOLD! Things that would normally have me turning away from a book, this author turns into magic. She’s just got the right touch and her storytelling is like no other.

Broken and Screwed is no different. I loved it and all the “feels” it pulled from me. This author has that kind of talent. She can reach the deepest part of her characters and make you feel them all the way to their core. And it’s always a spectacular journey decoding what makes them the way they are.

In this story, Alex is lost. She’s drifting away little by little and no one seems to really notice. Those that might have a clue, have no idea how to help her and they don’t really try. My heart completely broke for her. She had one thing going for her, one human connection that kept her somewhat together. Jesse, who she loved and needed, was her rock and kept her sane, but only for the short amount of time he would let her in. After that time was over, she’d be adrift again, the loneliness she felt was almost too much for her to bare alone. Her silent pain was intense and all consuming and screamed at you from the pages. There as a constant dark cloud over her. By the end of the book, this poor girl had basically lost everything and you can’t help but FEEL that.

Jesse was... different from this author's other heroes. I couldn’t get a beat on him for the entire book. He starts off intense and brooding and a major jerk, and that’s the way he stays throughout the entire book. There was a sense that he really did care about Alex, but he was distant, harsh and his aloofness brought out way too much desperation in Alex. She just wanted to be SEEN by him, by everyone... or by anyone really. Jesse should have been there because he knew her pain. He was the only other person in her life that loved her brother as much as she did but he was trapped in his own pain and I don't think he could see clear enough to recognize that he was close to losing Alex forever.

I wanted Jesse to man up and help Alex heal. He didn’t seem to understand just what was going on in her life. He didn’t ask. But then again, Alex didn’t tell. There was a huge silent rift between her and her friends and between her and Jesse. And I think it could have all been avoided if Alex had just Spoken.Up! Even just a little. But I also understand, she didn’t want them there because they felt sorry for her. She was confused and scared and really messed up, and her mind, no one cared or loved her enough to help her find her way out of the darkness.

Alex wanted Jesse to love her as much as she loved him and even though he might have loved her, he never told her or really even showed her, so she assumes he doesn’t. Guilt isn’t love and the abandonment she experienced from those in her life, left her shaken and worried she’d look weak and unwanted in Jesse’s eyes, so she kept quiet. And so did he. Like I said, Jesse wasn’t like this authors other heroes. He wasn’t nearly as perceptive, but I’ve already been told we get a good read on him on the second book so I’m looking forward to that.

This story was totally angsty! And I LOVED that. I adore books that can pull me into the drama and angst and keep me till the end and this book did just that. And that cliffy ending? WOW!

On to book two!

Buy the Book at Amazon | B&N