I binge read this whole series (well, all the books that are published so far at least) last weekend! I couldn't get enough. As soon as I finished one book, I immediately picked up the next one. This series is seriously addicting and a must read! I'll be posting my review for each book in the series over the next few days, so keep checking back. 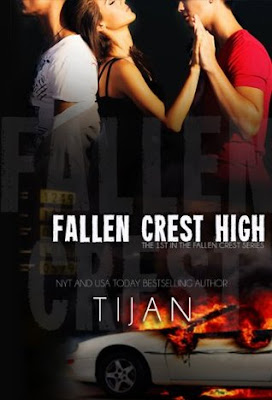 BOOK BLURB:
Mason and Logan Kade are two brothers who did their own thing. They were rich and expected to attend Samantha's school, Fallen Crest Academy. They chose public school and now she has to live with them. The problem is that she doesn't care at all: about them, about her friends, about her cheating boyfriend, or even about her parent's divorce. But maybe that's a good thing. Maybe change is a good thing.

This book was so full of drama! Drama, drama and more drama. I mean, it was drama at EVERY turn. Normally, I’d take issue with everything but the kitchen sink being thrown at a character just to cause drama and angsts, but as usual, Tijan can weave an incredibly complicated story with tons of plot twists and unbelievable character actions, into shiny gold. I loved this book. Sometimes you just have to take a step back, let the story take over and leave reality, practicality and judgement at the door ... and just have fun with it.

Story/Characters...
Sam’s life has, literally, in just one day, blown completely apart. Nothing is what it seemed just the day before and now she’s thrust into circumstances she never pictured herself in. Overnight, she’s lost her boyfriend, her best friends, her home, her father, her mother and even her humble social status. And what’s worse, she’s suddenly thrown into the wolves den with the likes of the socially elite Kade brothers, Logan and Mason, who have a reputation for trouble and chaos. I loved Sam’s character. This book is told in her POV and we get all her thoughts, her snark, her emotions, her angst and finally, when she’s had enough, we get all her breaking points and the blowout that come from it. She had to deal with so much in three hundred plus pages, but she did it brilliantly. Once she stopped caring what other people thought, she was a one woman powerhouse. I loved that about her. I adore strong female leads and she didn’t disappoint.

However, I also wanted her character sussed out a bit more. She’s a compulsive runner who pounds the pavement whenever life gets too intense, taking her body past its physical endurance, just to escape any kind of emotion or connection. We know she did this when she was younger and we know she had an eating disorder, but her past wasn’t a part of this book. I’m hoping with further installments, we’ll find out what caused these traits to take root in the first place.

Mason was silent, brooding, intense and downright hostile. Mason is still a mystery. I can’t wait to go back and read his novella to find out what made him the way he is. The first half of the book, he’s skulking around watching with calculating eyes. He trusts no one other than his younger brother Logan and his best friend, Nate. He’s wary of anyone he thinks might hurt them, so he doesn't warm up to Sam right away. Even as the story progresses, there were times I thought he’d break the silent treatment and finally step up to help Sam, but I think I preferred his slow build to trust before taking her into his fold. It let her learn to stand on her own before she had the Kade brother’s protection. But when he decided to trust Sam and to protect her, he knew how to do right and It. Was. HOT! I feel so dirty for admitting how incredibly hot I found Mason, considering I’m old enough to be his mom. But wow.... I’ll just leave it at that.

Logan was the wise-guy, always around with a cheeky comment or an inappropriate innuendo to clear the tension in the room. He and his brother, along with their best friend Nate, are thick as thieves and have each others backs no matter what. I enjoyed watching Logan dole out his charm for the ladies and rear back his fists for the male offenders he thought might hurt what he vowed to protect. We actually get more of what makes Logan tick in this book than we do Mason and I enjoyed every angsty, fun minute of it.

And the power Mason and Logan had over their peers and adults... the amount of humility they could pass down with just one look, not to mention the caustic words they could spill with little remorse or consequences was so far fetched, it totally worked. Like I said, suspend judgment and reality and this story takes over your entire life... at least for the amount of time it takes you to read it.

All the bullying, misdeeds, drinking, sex and partying is paved with money and social status in this book. All the kids are incredibly naive and egocentric. And all the adults were self-serving cheaters. All of them! Every couple, young and old, was in some form of adulterous relationship at one point or another and all the character were all about me, me, me. Poor Sam was caught in the middle of everyone’s meltdowns and they took it all out on her. Her humiliation and back-burner feelings were a running theme throughout the whole book. I felt so bad for her. She just couldn’t catch a break.

Like I said, lots of drama, but strangely enough, it works and works well. I loved this read and I’m excited to move on to book two, which I’ll be right now.

Posted by Craves the Angst at 3:43 PM