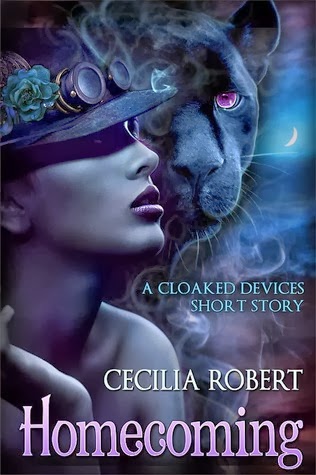 Book Blurb:
Five years ago, twenty-three-year-old panther shifter Sera Czedar left her home and her newly mated groom in a humiliating position after a mating ceremony gone wrong. She built a new life for herself in Varselles, the City of Outcasts where shifters exiled from their clans in the Seven Kingdoms can go for sanctuary.

Five years ago, panther shifter Levian Grayson was abandoned on the bonding bed by his bride, Sera. After years of tracking her, he arrives in Varselles, intent on staking his claim on her once and for all, even if it means hauling her over his shoulder just to make sure that happens.

Sera has always known her homecoming would eventually catch up with her one day. The one thing she can’t bear to do is hurt Levian, which will happen as soon as he finds out the reason she left him. Is she ready to take that path? Most of all, will Levian still want her when the truth comes out?

Reviewers Note: Homecoming is a short story/novella in the Cloaked Devices series and is a Steampunk, Paranormal Romance written by Cecilia Robert. I received this eARC from the author in exchange for an honest review through AToMR Tours.

3.5 Fantastical, Sexy Stars!
A Good Setup For Things To Come!

The Review:
This short story of about 130 pages is a fantastic lead in to what I'm sure will be a thrilling, provocative and successful series. I loved Homecoming and the world it sets up for the reader as well as the wonderful characters we get to know.

Story...
Seventy-five years ago, at the beginning of World War II, human scientists developed a bacteria that accidentally left Earth a wasteland and annihilated the human race, leaving the once hidden shifter population mankind's only hope with their supernatural blood. But humans experienced an unexpected consequence of mingling human and shifter blood, leaving humans to develop supernatural powers of their own as a result. Having to abandon Earth through a portal to a new world, the shifters welcomed what remained of the rare and gifted humans, coexisting together on Anndesia, their new home.

Anndesia seems to be a distinctive place mixed between old world fantasy and steam technology. There’s a bit of magic as humans have the power to manipulate elements and there are various races of shifters, ranging from panther, wolf, tiger, etc. I loved the combination, making this a creative and fascinating place to read about.

Characters...
Levian, beta of the Rhine Panther Clan, is a panther shifter searching for the other half of his soul, his missing mate Sera, who ran away the night of their mating. For five long years, he’s had detectives scouring the world for her but with each passing day, he becomes more distraught and less in control of his panther side. After getting word Sera might have been discovered and she’s been hunting down journals that may lead to disaster, Levian sets out with his charming twin brother and Sera’s Alpha father’s floating ship to bring her home.

Sera left her adored home the night of her mating with the shifter she loved because she was hiding a secret that would destroy him and her family. Living without her clan for that past five years, Sera had to learn a new way of life and learn the hard way how to take care of herself on the dangerous city streets all the while trying to stay low profile so her mate never finds her or the secrets she’s hiding.

I loved Levian’s character. He was brooding, dark and dangerous and a totally yummy character. He steamed up the pages with his domineering ways but when it came to Sera, he was gentle and kind and tried to control his animal side to give her the understanding and love she needs. Sera and Levian were hot together and I can’t wait to read more about them in the next book.

Teague, Levian’s twin brother is this self absorbed charmer who loves attention. I wanted to strangle him more than once but you can’t help but smile at his unique ability to get what he wants with just a smile. I’m interested to see if he changes after this short story.

Wishlist...
I really wanted more information about the journals and their significance. I read in the blurb of the next book in the series, titled Rise, that we will learn what the “Cloaked Devices” journals are used for. That was my biggest complaint in this short story. This book was a set up for what will come and we know that Sera is collecting these journals and her father is desperate to get them as quickly as possible and we get an inkling they could be used to destroy the world but we don't really know how or why.

The only other thing I would have loved to have seen was more world building. Anndesia seems to be a culturally rich place but I’d love to learn how and why the shifters all came to be there originally and how/why they were on Earth.

The Wrap Up:
Overall, this was a great start to what I'm sure will be a fantastic series. I'm looking forward to reading the next book, Rise and continuing Levian and Sera journey with the population of Anndesia in their next big adventure.

About the Author...
Cecilia Robert  writes YA, NA and Adult. My motto: Passion rules. I enjoy writing stories about people finding love in the most unexpected of places,and also about people finding their true purpose in life coupled with adventurous journeys, whether it's urban, fantasy, sci-fi, contemporary or paranormal romance. There's always a happy ever after, no matter how long it takes for the characters to get there.