"... there is something that keeps me reading ... It kept me wanting to move on to the next page to see what happened next." - Craves the Angst 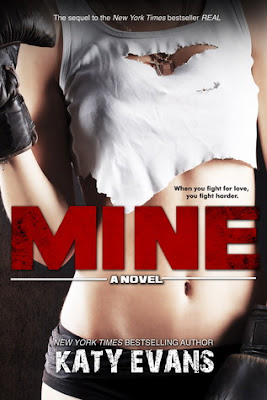 He's mine, and I'm his. Our love is all-consuming, powerful,
imperfect, and real...

In the international bestseller REAL, the unstoppable bad boy of the Underground fighting circuit finally met his match. Hired to keep him in prime condition, Brooke Dumas unleashed a primal desire in Remington "Riptide" Tate as vital as the air he breathes... and now he can't live without her.

Brooke never imagined she would end up with the man who is every woman's dream, but not all dreams end happily ever after, and just when they need each other the most, she is torn away from his side. Now with distance and darkness between them, the only thing left is to fight for the love of the man she calls MINE.

The Review:
Much like book one, I liked this read but I didn’t absolutely love it. Don’t get me wrong. It had a lot of things right. But there were also plot points and character actions that I didn’t fall in line with right away. And I never got the “feels” or the tummy flutters I wanted. Also like in book one, I didn’t connect with the character that well, but there’s just something about this series that keeps me interested and invested.

This book took an interesting turn. The beginning started out a bit slow, to be honest, but it soon picked up about middle way and got a lot more interesting. However, Brooke’s storyline is one I wasn’t fully on board with. I felt her and Remy had so much drama and angsts between them and so much they needed to work on, that Brooke turning up preggers in the beginning was just a step to far too soon. For half the book, she’s out of commission and bed ridden, reflecting on her life and how jealous she is, how hot for Remy she is, how frustrated she was. Like in book one, it got old, quick. After book one ended, I kinda saw their story moving in a different direction, but since it didn’t, I decided to just go with it and see where the story took me. And in the end, I liked it much more than I thought I would.

I still loved Remy! He was as hot as ever. He’s complicated, full of self doubt and scared of good things because he doesn’t think he deserves them. He’s also sexy, passionate and possessive. We really get a lot more of Remy and his past and what makes him the fighter that he is in this book and I loved every delicious, torturous minute of it. He’s got so many layers and peeling each one back only to discover another layer and a lot more angst and mystery, was so much fun.

I still didn’t love Brooke. That girl ... ugg! Like I said, she was CONSTANTLY talking about how much she loved Remy, how wet she was for him, how much he was her “Mine”, how she couldn’t understand how he and his god like body with all it’s rippling muscles, could love and want her. She was seriously insecure and a touch of that would be angsty and fun to read but oh my, there was chapter after chapter filled with it. And I don’t care how much she said she did, she didn’t trust Remy. No one would have that much doubt if they did. Other than Brooke accepting him fully for the way he was, I often wondered what he saw in her.

This second book felt very similar to the first one, but also like the first one, Remy stole the show. The sacrifices he was willing to make, that he DID make, should have been enough proof of his feelings for Brooke and eventually, she did come around, but really, how many more times did I need to read how how frustrated she was, how much she wanted him, how much his muscles rippled or how his body turned her on. It was just so much overkill!

Even with all the bad, there was a fair amount of good too. After I accepted the story turn, I settled in and watched the drama unfold and it was really good. I couldn’t tell you what it was, but there is something that keeps me reading, just like in book one. It kept me wanting to move on to the next page to see what happened next.

The ending was well done and I came away smiling. I’m invested now and I want to read book three for Remy’s POV! I’m looking forward to that one! Maybe then I won't have to read about Brook’s wet, clenching sex anymore ... hopefully, anyhow.

Posted by Craves the Angst at 9:08 AM