"Wickedly seductive and positively electrifying, Midnight Blue had heat, passion, emotion ... it had all the feels!" - Craves the Angst 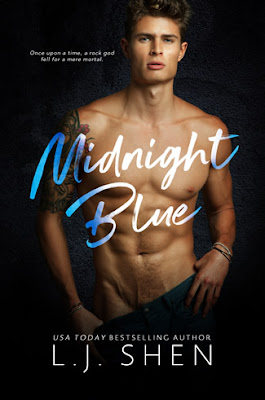 It should have been easy.

I needed the money. He needed a babysitter to keep him from snorting himself to death.

I was cherry-picked especially for him. Responsible. Optimistic. Warm. Innocent.
The worst part is that I should have known better.

“Don’t get near the devil in a leather jacket. He’ll chew you up and spit you out.”
Sounds familiar? That’s because it was a headline in a tabloid the second time he got arrested.

My name is Indigo Bellamy, and I sold my soul to a tattooed god.

Problem was, my soul wasn’t enough for Alex Winslow. He ended up taking my body, too.

Then he took my heart.

Then he took my all.

REVIEWER'S NOTE: I received an eARC from the author in exchange for an honest review.

The Review:
YES! Just .. all the yes’s! This is how it’s done, people! Wickedly seductive and positively electrifying, Midnight Blue had heat, passion, emotion ... it had all the feels!

I loved this book! Told in dual POV’s, everything about it was spot on sensational and I hated to see it end, but wow, what an ending.

Story/Characters...
Three months. Three hundred thousand dollars. All she has to do is help put the broken prince back together and keep him in one piece.

Three month. Three long months, all ending with a vindictive plan to steal back his ex and ruin her for breaking his heart.

But something extraordinary happens when a blue haired beauty unexpectedly enters his life and changes everything.

You look at me with dynamite in your eyes, waiting for me to light up the match and finally set you on fire.” - Alex

Living with her older brother and his small family, twenty-one year old Indigo Bellamy gratefully accepts the hired position to tour with rock god, Alex Winslow, and shadow his every move, being his sober companion ... aka babysitter. She’s to keep him sober, drug free and also keep his head above water so he can concentrate on the tour and writing his next album.

Needing the money to help support her destitute family, she agrees. Things have been tough since her parents died, but she’s determined to help her family out of their spiraling situation. And even though she tries to resist, promising herself that she won't give in to Alex’s plan to bed her, won't give into his beauty, that's a promise she doesn’t know if she’s prepared to keep.

I loved Indie’s character. She was open and easy to connect with. She didn’t have huge, grandiose dreams. She was simple and grounded, real and heartfelt. But she was also a spitfire. She didn’t let Alex walk all over her. She stood her ground and offered Alex something honest, something he was missing. Goodness.

Alex was a hot headed alpha male who was volatile, self destructive, self absorbed, conceited and a royal pain. But he’s also misunderstood and though he puts on a tough front, he’s vulnerable and one might even say fragile. He’s in so much pain, feeling he trusted the wrong people and those he surrounds himself with, do unspeakable things, trying to protecting him in a semi-misguided way.

I’ll be honest, Alex was a huge, HUGE arse, but how Indie stayed away for so long, I have no idea because he was also super effing HOT! And under all that burley sarcasm and hate, was a person who took care of his own, loved in his own way and protected what he thought needed protecting. The broken prince had layers and I loved peeling back each and every one of them to the true king that was underneath all that intimidation.

When Alex first meets Indie, he’s so filled with rage, he can’t see her and he wants her gone. Thusly starts a slow burn that seeped inside of me and hooked every part of me. Then he wants more. He wants her to be his muse, he wants her memories, her insights and he wants her to be his ride back to the top. He wants to use her, take everything from her, including her soul and everything she’s ever given to anyone else. He says so and he means it. That’s when the slow burn turns into a powder keg. Light a match and BOOM!

Alex and Indie were SUPER SEXY, OFF THE CHARTS HOT with intense sexual tension and sizzling chemistry. Watching these two war it out, their hatred morphing into something more, stole my breath, had me on the edge of my seat and kept me glued to the pages to see what happened next.

And that climax? Annihilated me! Alex had to let go of the past and though it was hard for him, he saw a brighter future with Indie by his side. But things get twisted and broken before he ever really understands what he’s lost and in one of the best endings I’ve ever read, Alex has to find a way to put things right.

The Wrap Up:
LJ Shen has a true talent for writing complicated anti-heros who dominate and bulldoze through the heroines. But they also have depth, heart and ultimately you can’t help but love them. Alex is just that guy. He comes in like a strong tornado and completely takes over the story. Indie and Alex together, their story, their journey to an epic epilogue, was powerful, impassioned and down right seductive!

This book was amazing! It just kept getting better and better the more I read. I couldn’t put it down and finished it in one sitting. I couldn’t ... wouldn’t budge until I hit that last page.

I love this author's work, and this one was definitely a winner!

Nat’s words came back and haunted me like a bad haircut from the eighties. An irrational need to check the goods took over me. It wasn’t like he minded. According to the rumors, his dick had seen more cameras than Kendall Jenner. Slowly—so painfully slowly—my eyes drifted down his sinewy body. I just wanted to see what all the fuss was about. Whatever I had in mind, though, didn’t come close to the real thing. Thick, long but not atrocious. With thin veins running through its length.

“Nice view?” he groaned, tucking his junk back into his briefs. His profile was glorious. Strong jaw, pouty lips, eyes like sex…

My eyes snapped up when I realized he was talking to me. “I wasn’t…”

“Looking? Yes, you were. Next time take a picture. It lasts longer.” He rolled his zipper upward and flushed the toilet with the toe of his boot. He turned around and squirted soap into his palm, washing his hands almost violently—rubbing between each finger and scratching his knuckles like he wanted to shed his own skin. When he was done, he looked around for a towel.

I cleared my throat, scrambling to regain my wits. “Longer than the glimpse or longer than your performance?”

Casually—so unbearably casually—he wiped his wet hands over my purple dress. I gasped, moving sideways. It looked like he was about to open the door and get out, but before I had the chance to yell at him for using me as a human towel, he slammed me against the wall, bracing both his arms above my head and pinning me to my spot. I let out a shriek of surprise at the sudden proximity.

Heat rolled off his body, making my back arch and my breath catch in my throat.

“Let’s make one thing clear—I could fuck you to a point of numbness without even breaking a sweat if I wanted to. Now, careful, New Girl. If you don’t keep your distance from me, I think I just might.” 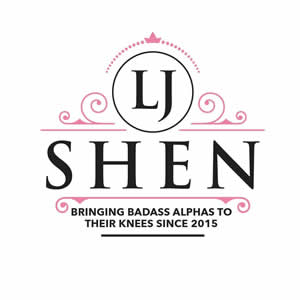 L.J. Shen is an International #1 best-selling author of Contemporary Romance and New Adult novels. She lives in Northern California with her husband, young son and chubby cat.

Before she’d settled down, L.J. (who thinks referring to herself in the third person is really silly, by the way) traveled the world, and collected friends from all across the globe. Friends who’d be happy to report that she is a rubbish companion, always forgets peoples’ birthdays and never sends Christmas cards.

She enjoys the simple things in life, like spending time with her family and friends, reading, HBO, Netflix and internet-stalking Stephen James. She reads between three to five books a week and firmly believes Crocs shoes and mullets should be outlawed. 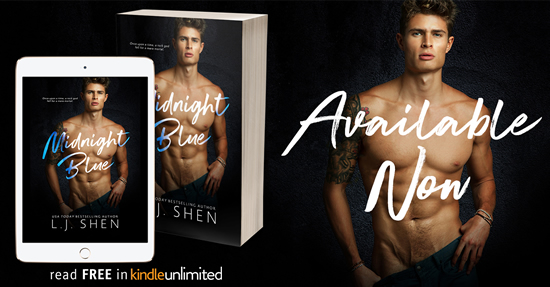