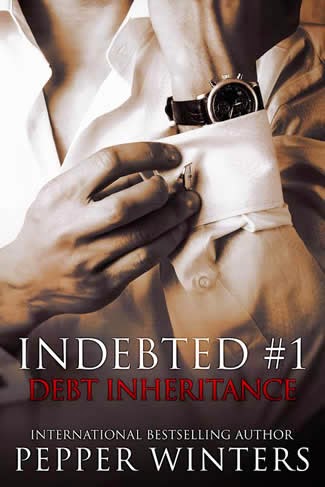 BOOK BLURB:
“I own you. I have the piece of paper to prove it. It’s undeniable and unbreakable. You belong to me until you’ve paid off your debts.”

Nila Weaver’s family is indebted. Being the first born daughter, her life is forfeit to the first born son of the Hawks to pay for sins of ancestors past. The dark ages might have come and gone, but debts never leave. She has no choice in the matter.

She is no longer free.

Jethro Hawk receives Nila as an inheritance present on his twenty-ninth birthday. Her life is his until she’s paid off a debt that’s centuries old. He can do what he likes with her—nothing is out of bounds—she has to obey.

There are no rules. Only payments.

4.5 Unsettling, Edgy Stars!
Suspenseful and Devilishly Dark! A Page-Turning Serial That Will Entice and Thrill As Well As Shock and Captivate!

The Review:
Where do I even start with this review?! I’m both in awe and also twisted inside out!

First off, you kind of have to throw reality and common sense out the window to see the gem that is this read. A centuries old slavery contract still being enforced in todays time, even with pocket-politicians just seems unrealistic. A twenty-four year old woman, even sheltered and innocent, who doesn’t know enough about sex to figure out a hand-job also seems a bit on the “wtf” side. And Jethro and his “brotherhood” can’t be fitted into one concrete category as they are an affluent MC that’s in the diamond trade business and are thuggish, brutish but also high class aristocrats. Humm...

Secondly, I’m a huge fan of Pepper Winters. She can write “dark and depraved” like no one else and every time I read one of her books, I’m tense and anxious the whole way through because her writing always draws me in and makes me “feel” and “experience” the pain, agony, humiliation and fear right alongside her characters. This book was no different. I loved every bit of it, especially when I got to the end only to realized just how disturbed it left me. Though a bit unrealistic, the story was uniquely different and captivated me from the start. It also left me in knots. Days later and I’m still reeling over what the heroine has already endured and what her future holds if she can’t find a way to save herself.

I’m all about the heartbreaking angsts. But this book completely pole vaults OVER the angsts and lands right into an unyielding pit of unease and apprehension. Yeah, I loved it and I can’t wait for the second installment!!

Quote Spotlight...
“I hated being lied to.
I hated even more believing those lies until the truth decided to come for me.
Turned out, I was never an individual; I was a possession to trade.
I was never unique; someone had lived my life many times before, never free, never whole.
My life was never mine.
My destiny was already written.
My story began the night he came for me.”

Story...
Twenty four year old Nila Weaver is making a name for herself in the fashion industry, on her way to rising past the name of her family, which is well known for fashion and textiles. She’s young, educated and has goals but she’s also been sheltered by her overprotective twin brother and her watchful father. At her debut fashion show, which seems to have caught the attention of high society, she’s looking forward to a bright future following a night out on the town to celebrate with her brother and father. But surprisingly, her father introduces her to a handsome but obviously cold man, making it apparent she needs to go with him.

That one decision changes everything for Nila and the only lifeline she has, seems to come from a mysterious texter who is just as distant as the man she’s handed over to.

He was told it would be easy. He was told she’d come quietly. Jethro Hawk has a family obligation to keep and a debt to collect which he’s excited to see settle in serfdom and pain. The Weavers and Hawks have been tied together for centuries in a legal and binding contract of flesh and blood. The first born daughter to the first born son, to do with as he sees fit and the Hawks love to take out their family vengeance on the Weaver women in the most debasing ways possible. And it’s now Jethro’s turn and he’s all to happy to hunt his prey.

Quote Spotlight...
“There was a debt to be paid. And I was the method of extraction. Plain and simple. I’m a Hawk. She’s a Weaver. That was all I needed to know.”

Characters...
In true Pepper Winters fashion, the hero is dark, intense, broody and a hairs breadth away from right out insanity, but always with a strong and intriguing core that draws you in completely. The rules of civility never play out within her stories and I love their uniqueness and their disturbing nature.

The Weavers have a debt to pay and it’s paid with pain, blood and ultimately death at the hands of their captors. As with the Monster’s In The Dark series, I read the entire book of Debt Inheritance with fire-bright iron rods, scorching burn marks inside my stomach. I both feared and needed to know what came next as Nila lives out the demotion of her new life. Seeing what Nila already endured and knowing what’s to come, my insides burned in dread for her. There were no flowers or charm in this first book. There were no traditional angsts. There was a well of trepidation and silent shock at the inhumanity she had to endure and what is to come in her expiring future.

Nila starts out a bit timid, certainly weak and doesn’t like to speak her mind. She suffers from vertigo brought on by stress so she seems fragile. I enjoyed Nila’s character. She wavered between strength and hopelessness but I admired her passion, her desire to live and survive and her mindset that she could and would find a way to free herself. This author does an incredible job of painting a bleak and horrific future for her heroine. And I’m excited to see if Nila’s strenght is unwavering or if she breaks only to be built back up and wield a stronger sense of herself.

Jethro is fierce, entitled, uncompromising, unbreakable and scornful. He and his family operate on an entirely different set of rules than the modern world. Their rules are passed down from generations and though their traditions may seem barbaric in todays world, the Hawks hold those rules tight, letting them govern their family, all in an effort to amass their empire, which they’ve successfully done. Their entire male line seems disconnected from compassion and they know they have the wealth to back them on their conquests. To them, this is the “normal” world and they expect others to yield.

I’m still not sure how I feel about Jethro. I can definitely say I don’t like him as he stands now. In fact, I kind of hate him and I’m sure I’m meant to. He’s merciless and his family is like a pit of vipers. When Jethro first appears, he’s intrigued by Nila. That’s obvious. But he’s cold, aloof and there’s not an ounce of compassion in him. He remains this way through the entire book and with the heritage that’s been drilled , beaten and tortured into him since birth, it’s no wonder because it’s definitely left its imprint and scars. He’s built a thick and unwavering ice wall between his emotions and his heart. BUT with Nila, we begin to see the tiniest, thinnest... almost unrecognizable crack form in the ice wall, so I’m anxious to see how his character develops.

Quote Spotlight...
“One mistake six hundred years ago put a curse on her entire family. One mistake sold her life to me in a mountain of unpayable debt. I inherited her. I preyed on her. I owned her life and had the piece of paper to prove it.”

Questions...
I know throughout the story, things will be revealed and I want NEED to learn what the Weavers could have possibly done to convict their entire female lineage to the twisted life of imprisonment, brutality and slavery the Hawks can, would and do inflict on them without repercussions or forbiddance. What caused the Hawks to turn into such sociopathic men as to want and desire such a commitment. And why, after so many years, is it still happening. The Weavers are completely and totally at the Hawks mercy. You’d think they’d stop having children at some point so there was no chance a female would be forced to pay the debt. And unless there’s more to the story than we’ve already learned, which I'm positive there is, there seems to be no justification to what the Hawks do or the outcome the Weavers endure. To me, at this point, the Hawks are the evil-doers including Jethro and unless he does some serious salvaging and redeems himself, he is infact a villain. A hot villain. A smokin’ HOT, lusty villain, but a villain nonetheless!

The Wrap Up:
I enjoyed this read but I also found myself wanting to hide in a corner and rock myself to sleep with a sweet nursery rhyme and a fluffy blankey. Pepper Winters books are different in that, she’s not scared to explore the extreme side of the dark. She’s not afraid to hurt her character, to break them and then rebuild them. Her heroes are anti-heros and her heroines have to go through a lot of pain and emotional distress before coming out the other side in unity. I’m excited to see where Nila and Jethro finish.

This book leaves off with an incredibly intense cliffhanger and book two can’t come soon enough. The wait is going to be agony!